Photography alumnus David Hyams is featured in the Desert News!

Congratulations to MFA alumna Deia Schlosberg for being honored by the DOC NYC 2nd Annual 40 Under 40 list to honor 40 documentary talents under the age of 40.

Congratulations to alumnus Tom Frank, '75, on being awarded a lifetime achievement award from the Idaho State Broadcasters!!

As of this fall, Tom will have worked at KMVT in Twin Falls Idaho for 44 years. He is currently the Creative Services Director.  A story about Tom and his award is available at this Facebook link and at KMVT Tom Frank.

Our 2018-2019 alumni accomplishments featured in the MSU News Service.

SFP alumna Marci Mudd, Art Director for the Oscar winning movie BlackkKlansman  returns to the VCB for a screening, Q & A with the students, and meeting with students in Tom Watson and Jim Joyce's classes.  Tom Watson, Vicki Miller, Marci Mudd, and Dean Adams in the picture.

Congratulations to alumna Christi Cooper who has been awarded with the inaugural SFFILM Environmental Fellowship for her documentary Youth v. Gov!! 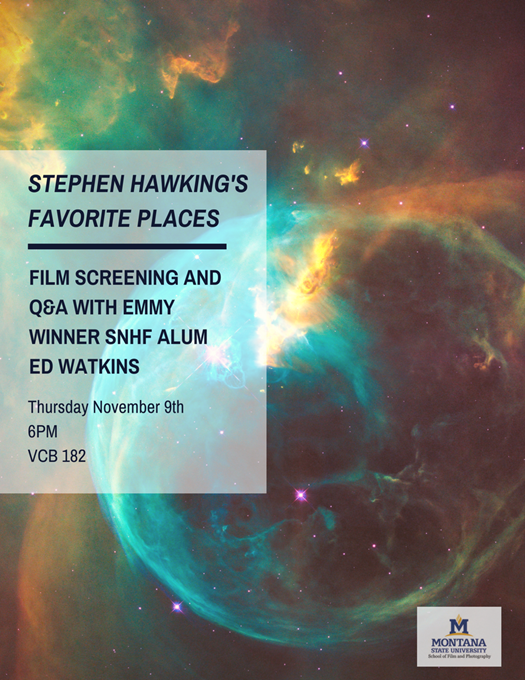 SFP alumnus Kyle Eaton (class of 2002) is raking in awards for his film "Shut Up Anthony" as he makes the festival circuit.  Congratulations Kyle!!

Congratulations to MSU School of Film & Photography Assistant Teaching Professor and alumnus Karl Swingle on being awarded a Humanities Montana grant to fund his documentary, The Camp Poplar Cannon!

Congratulations to MFA alumni Roshan Patel for winning the best STUDENT/EMERGING Award at the 2016 Science Media Awards & Summit for his film, "Red Wolf Revival", and Abby Kent for taking a Special Jury Prize for her film, "Transistors: Teeny Tech that Changed the World", narrated by Eliza Lily Goode!

Congratulations to Brittany Nelson on winning the Creative Capital Grant! Brittany has a series of big solo shows coming up this year.

Congratulations to 2013 Photography graduate Sean Thomas Foulkes for being one of four finalists for the 2016 Aperture Portfolio Prize!!

UNBRANDED, the award winning documentary feature film about four young men riding wild mustangs on a 3,000 mile border-to border Mexico-to-Canada trek to advocate for wild horse adoption and conservation, is featured in the national magazine Cowboys & Indians. Several key members of the film team  taught or graduated from our School of Film and Photography. "Unbranded" was produced by Professor and School Director Dennis Aig, graduate Phill Baribeau directed and was the lead cinematographer, alumnus and former instructor Scott Chestnut edited the film, alumnus Korey Kaczmarek was co-director of cinematography, gradaute Paul Quigley was the assistant editor, recent graduate Katie Roberts was an assistant editor,  and fellow alum Vanessa Naive was the Production Coordinator. Several MSU film students served as production assistants. Cindy Meehl, who directed the acclaimed film "Buck," about MSU honorary degree recipient and natural horsemanship trainer Buck Brannaman, was executive producer. Will Lake Springstead began as an intern and moved up to be a sound editor and audio specialist.

Tom Berninger is a 2002 graduate of Montana State University's School of Film and Photography (then known as the Department of Media and Theatre Arts). His acclaimed documentary, Mistaken for Strangers, which documented the alternative rock band The National, opened the 2013 Tribeca Film Festival. The film was recently released on iTunes and other web outlets. Will Ferrell's online comedy site Funny or Die features a parody ofTom's film featuring Zach Galifianakis and Ted Danson. Congratulations Tom!!

Congratulations to MontanaPBS, SFP alumni and current students who work on 11th Str. and Grant and Indian Relay. The two shows won four Regional Emmys in the following categories:

Thank you for attending the 2014 SFP Alumni Reception. We look forward to seeing you next year!!

Congratulations to School of Film and Photography Master of Fine Arts alumna Deia Schlosberg! Her documentary film, Backyard, about fracking and its effects won two Emmy College Television Awards in 2014 in the categories of Documentary and Bricker Humanitarian Award.

Director and MSU alumnus Tom Berninger, class of 2002, met with students and discussed his documentary "Mistaken for Strangers".

Special thanks to Montana State University film school alumnus John Dahl for participating in a special open forum and discussion with students.

A 1981 graduate of the film school and MSU, John then attended AFI and has enjoyed a long and critically acclaimed film career. Best known as one of initiators of "neo noir," John's films include Red Rock West, The Last Seduction, The Great Raid, and You Kill Me. He has also directed multi-episodes of Californication, Dexter, and other award-winning television series. John will answer questions and has offered to critique selected senior films.

"Deer Father", directed by alumnus Alex Brinkman, class 2013, won the Audience Choice Award for Narrative Short at the Northwest Filmmakers Festival in Portland. Congratulations to Alex and all the SFP crew!!

Chris Mangano, class of 2005 and former Checkout Manager is promoted to VP of Production and Development of Permut Presentations. Congratulations Chris!!

Kevin Connolly in the Summer 2013 edition of the MSU Collegian.

Chris Mangano, class of '05, is making headlines coast to coast producing movies. STRUCK BY LIGHTNING is a hit on VOD at Time Warner Cable and Comcast. MATCH, starring Patrick Stewart, Carla Gugino and Matthew Lillard, currently in post production, is featured in the Hollywood Reporter and Deadline.

Finding Traction, a new film by SNHF Alumni showcases the Sport of Ultra Running and Bozeman Athlete Nikki Kimball. Finding Traction is being produced and directed by Jaime Jacobsen, '08 with Fours Five Productions, ColorBURN Productions, and MontanaPBS. The film will be broadcast on public television and entered into the film festival circuit in summer 2013.