Congratulations to alumni Eric Bendick, Tom Winston, and the Grizzly Creek team’s film Path of the Panther for winning the Audience Award for Best Florida Feature in the Florida Film Festival. 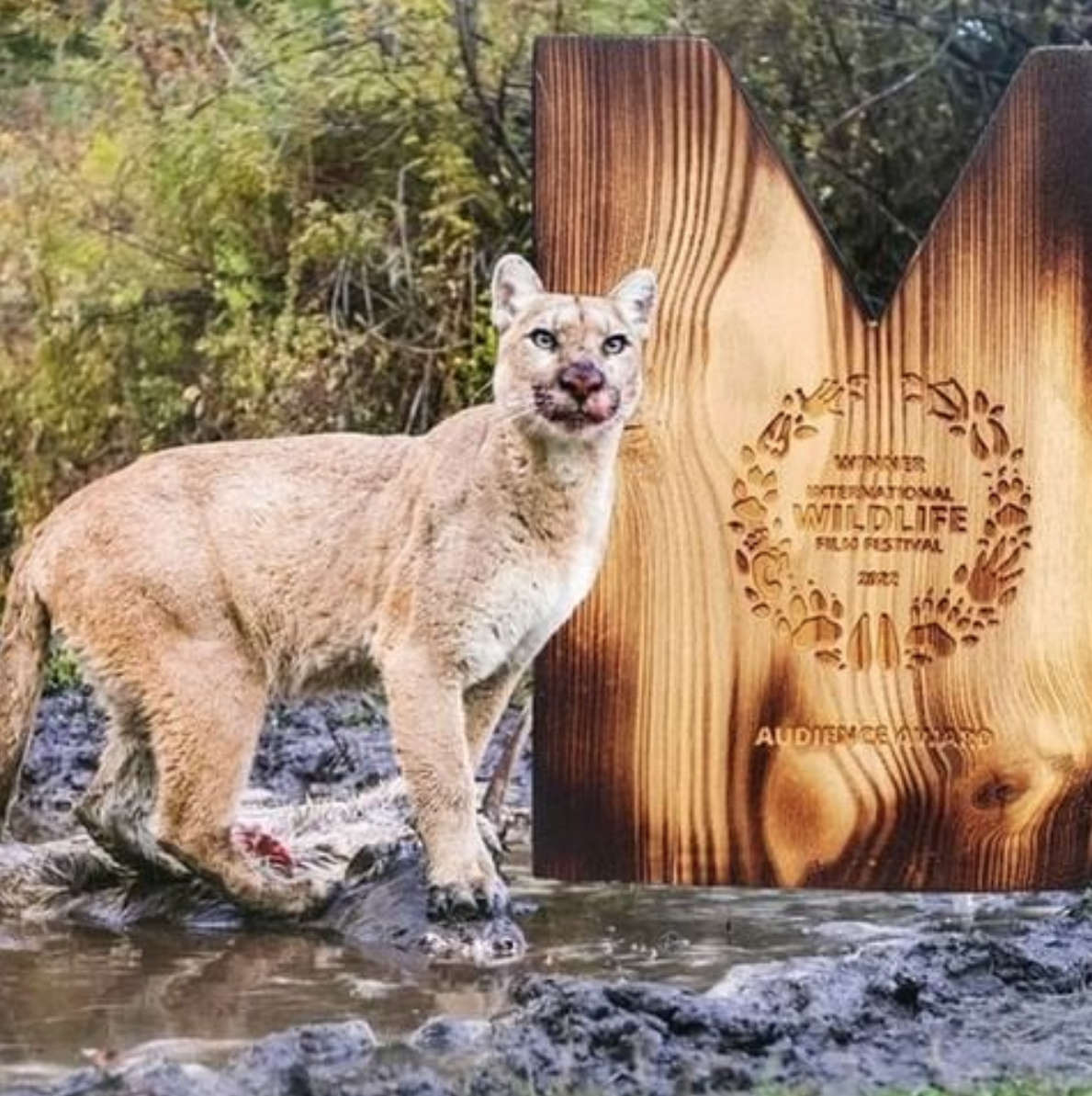 A first-of-its-kind documentary series chronicling a group of athletes, artists, and activists across snowboarding, surfing, and skateboarding, Fabric is a five-part series that illustrates what’s possible when sport is leveraged as a vehicle to affect fundamental change.

Each of the five episodes is centered around a specific theme—from Knowledge and Adaptation to Activism, Cultural Heritage, and Community—and showcases a group of groundbreaking humans united by their connections to people, place, and pursuit.

Fabric is a partnership between FBRC Media and Happy Okay LLC. It’s produced and directed by Robin Van Gyn) and Justin Taylor Smith, edited by Smith and Emily Lea, written by Mary Fenton, and executive produced by Yulin Oliver.

Watch it on ITunes or Prime Video.

MFA Thesis student Olivia Fay Andrus was interviewed by KBZK. She discusses how the MFA in Science and Natural History FilmmakingProgram has influenced the creation of her film company, Genesis Productions LLC.

The Bozeman Premiere of the acclaimed feature documentary Youth v Gov, directed by MSU alum Christi Cooper, took place on Wednesday, March 23 at 6:30pm in the SUB Ballroom A. This event is presented by the MSU Leadership Institute, the College of Arts and Architecture, and the School of Film and Photography.

Youth v Gov tells the story of 21 American youths, now aged between 13 to 24, who sued the U.S. government on Fifth Amendment grounds, claiming that their rights to life, liberty, and property have been infringed through actions they claim created a climate crisis that they must inherit. Twelve MSU alumni from the School of Film & Photography’s MFA and undergraduate programs participated in the film. The film has been in 51 film festivals and has won 25 awards. School of Film & Photography MFA Alum Christi Cooper and selected members of the film’s production team will attend the screening and the meet-and-greet reception that will follow it. . The MSU Press Release for Youth v Gov contains additional information about the film and the screening.

On Thursday, March 24th from 12:15-1:15pm, the MFA in Science and Natural History Program hosted a special Q&A for SFP students and faculty with Christi Cooper and several members of the production team in Studio B.

Watch the KBZK coverage of the premiere at the KBZK website.

Congratulations to Dennis Aig, nominated by the students, staff, and faculty of the SFP. The Corgi Award is a monthly award given to an SFP staff, faculty, or student who has shown kindness, commitment, and hard work during their time at the SFP.

Dennis was an exemplary candidate for the award, and the SFP is incredibly grateful for everything Dennis does for the community.

Youth v Gov, produced and directed by MFA alum Christi Cooper and involved 12 alums from both the undergrad and graduate programs, was cited for its Impact Campaign.

In the Grand Prismatic Category the MFA has two alumni honorees: Professor Colleen Thruston of the University of Arkansas and Roshan Patel, media producer for Smithsonian's National Zoo and Conservation Biology Institute.

Congratulations to all the filmmakers!

A Walk Through The Land of 1,000 Hills wins Best Student Short Film

Congratulations to Chema Domenech! His film, A Walk Through The Land of 1,000 Hills won Best Student Short Film at the 2020 Ireland International Film Festival!

To read the write up about the film, please visit the Ireland International Film Festival website.

Deia Schlosberg won the John de Graaf Environmental Filmmaking Award at Wild and Scenic 2020. The award, named in de Graaf’s  honor, is presented each year at the Wild and Scenic Film Festival in California. De Graaf is the Executive Director of Take Back Your Time and co-founder of The Happiness Initiative.

A Walk Through The Land of 1,000 Hills wins Student Filmmaker Award

Chema Domenench won the Student Filmmaker Award at Wild and Scenic 2020 for this film A Walk Through The Land of 1,000 Hills.

Congratulations to to Alain Douchinsky for winning the Helix for Best Student & Emerging Science Filmmaker at 2018 SMASH!!

Congratulations to SNHF thesis student Jason Roehrig for his recent win at the Wildlife Conservation Film Festival! Jason produced, filmed and edited the film for the Western Land Owner's Alliance focused on the conservation efforts by landowner David Spicer to protect the Amargosa toad in Nevada.

Learn more about Jason's experience through a Montana State article or check out the award winning film!

Student Annie White (Cohort 11) with alumni Emily Narrow (Cohort 10) and Caitlin Bailey (Cohort 12) are interviewed about the work they do for NOAA aboard the ship Okeanos Explorer.

In the article , Annie, Emily and Caitlin talk about the ups and downs of working on a ship, exploring never before seen locations on the bottom of the ocean, and the women who inspired them to pursue their work.

Congratulations to SNHF at the 40th International Wildlife Film Festival

Congratulations to MFA students Katie Mullen, Hugo Sindelar and Jason Roehrig for screening their films at the 40th International Wildlife Film Festival in Missoula, MT. IWFF is the oldest and longest running wildlife film festival in the world.

Additionally, congratulations to Jason Roehrig (Cohort 14) for winning Best of Fest in the Student Category for his film LUMOS about glowworms in caves in New Zealand.

Congratulations to both Stephani Gordon (Cohort 6) and Eric Bendick (Cohort 4) on their films at BLUE Ocean Film Festival!

Congratulations to Stephani Gordon for her film My Haggan Dream chosen as a finalist for the Children's Category!

Additionally, congratulations to Eric Bendick and the Grizzly Creek crew for their honorable mention in the Broadcast Program Category with The Forgotten Coast!

The Annual Element Film Festival run by students showcasing student films from across the globe on a variety of topics in science and natural history. Congratulations to alumni John Shier (Cohort 1) and Dawson Dunning (Cohort 6) for winning an EMMY for Outstanding Cinematography: Documentary and Long Form for their work on Wild Yellowstone!!!

And congratulations to Abby Kent (Cohort 12) for winning a Special Jury Award for her film Transistors: Teeny Tech that Changed the World!!!!! 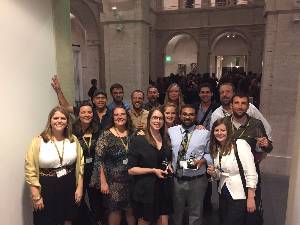 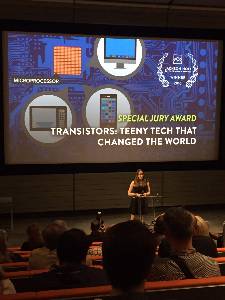 Additionally, Secret Earth: Yellowstone Supervolcano, produced by a team of MFA alumni and local filmmakers at Grizzly Creek Films, was selected as a finalist in the Science Ambassador category.

Eddie Roqueta (Cohort 12) recently acknowledged at the Emmy's for winning the College Television Award for his film "Silencing the Thunder."

Kathy Kasic, a 2007 graduate of the MFA in Science and Natural History Filmmaking (SNHF) Program, will be joining the School of Film and Photography (SFP) as non-tenure track faculty member for the 20112-13 academic year.

Chris Palmer Receives the 2012 Tobias Award Legendary filmmaker, author, conservation activist, and educator Chris Palmer of American University received the 2012 Ronald B. Tobias Award for Achievement in Science and Natural History Filmmaking Education at a ceremony during the Tarkio Retreat at the International Wildlife Film Festival in Missoula, Montana, on May 10.

The following MFA in Science and Natural History Filmmaking students successfully defended their thesis work in the 2011-12 academic year..

Currently, two MFAers are creating videos for the prestigious FieldMuseum in Chicago.

For the first time, the MFA in Science and Natural History Filmmaking program participated in the 6th CMS Vatavaran Environment & Wildlife Film Festival in New Dehli, India, in December 2011. Several hundred filmmakers from Europe, Asia, Australia, New Zealand, and the Americas screened films, met for panel discussions, and discussed the many different facets of environmental filmmaking.

Ideas for our news feed? Email us at snhf@montana.edu.